Two Avon High School Alums – Nick Mazzola and Zach Hubbard were part of the Challenger Crew Juniors Gold 98 team which won the U19/20 National title on Sunday, July 30th at the U.S. Youth Soccer National Championship in Frisco, Texas.  The U.S. Youth Soccer National Championship series was a week long tournament that featured the country’s top teams in the U13 through U19/20 boys and girls age groups.  Challenger Crew after its success through group play and a victory in its semi-final game met West Coast Haney from California in the final match and posted a decisive 4-0 win.  The team will have its name etched on the oldest trophy in youth sports, the James P. McGuire Cup, which will eventually be housed in the U.S. Soccer Hall of Fame.  The Challenger Crew team is the first Ohio boys’ team to win a U.S. Youth Soccer National Title. 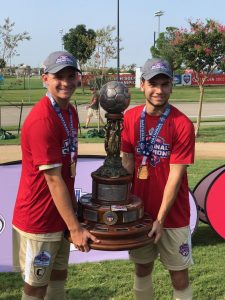 Nick Mazzola is a 2016 graduate of Avon High School.  He is entering his Sophomore year at St. Bonaventure University where he plays on the Men’s Soccer team.  Nick received All-Ohio, Greater Cleveland and Lorain County player honors while at Avon.

Zach Hubbard is a 2017 graduate of Avon High School.  He is entering his Freshman year at Ashland University where he will play on the Men’s Soccer team.  Zach received Greater Cleveland and Lorain County player honors while at Avon.@avoneagles