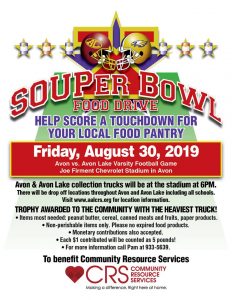 The annual SOUPer Bowl Food Drive to benefit Community Resource Services (CRS) will take place Friday, Aug 30, at 7 p.m. at the Joe Firment Chevrolet Stadium, 3075 Stoney Ridge Road, in Avon during the Avon vs. Avon Lake football game. This annual food drive is a friendly competition between the Avon and Avon Lake communities.

The communities are currently collecting food (non-perishable items only) and monetary donations for the CRS food pantry, which supports families in need in both communities. Each dollar contributed will be counted as five pounds of food. Food trucks for each community will be stationed at the football field and will be weighed after the first quarter of the game. The winning community of the food drive competition will be announced at halftime and will be presented with the SOUPer Bowl trophy.  Congratulations to Avon for winning last year’s SOUPer Bowl, although the real winner is CRS and the families served in Avon and Avon Lake.

The generosity of students, staff and community members from both Avon and Avon Lake is overwhelming each year.  Both communities together donated $9,978 and 6,953 pounds of food last year.  Since its inception in 2010, the SOUPer Bowl Food Drive has raised a total of 57,519 pounds of food and $99,539 in monetary donations.

Items can be dropped off at any school building in Avon and Avon Lake, or fans can bring food/cash donations to the football game Aug. 30.  For more information, contact Pam at 440-933-5639, or go to go to aalcrs.org. @avoneagles