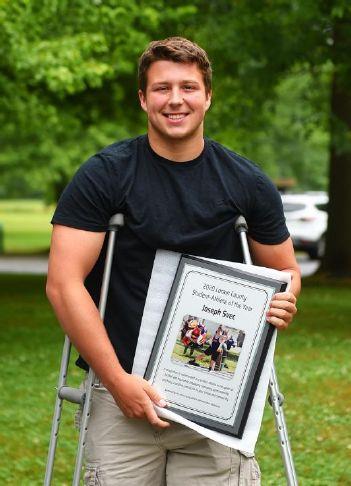 ELYRIA — In a senior year that ended prematurely, Avon’s Joe Svec and Amherst’s Lexy Alston distinguished themselves with their athletic achievements, scholarship and commitment to community.

They were recognized Monday when they were named the 2020 Lorain County Athletic Administrators Association male and female student-athletes of the year in a ceremony at the Lorain County Metro Parks Bur Oak Reservation.

“This is an incredibly huge honor for me and I wasn’t expecting it,” said Alston, who who will continue her athletic and academic careers at Eastern Michigan University where she will play soccer. “I’m so thankful for everyone who nominated me.”

In addition to earning nine varsity letters at Amherst, Alston was also a two-time All-Ohio soccer selection, a five-time state qualifier in track and field and earned All-Southwestern Conference honors on the basketball court while helping the Comets to the district finals for the first time in over a decade.

“I got a letter recently from a young kid who said they really looked up to me and that was really heartwarming to know people think of me this highly,” Alston said. “Working with kids with special needs just humbles you and makes you so thankful for what you have in your life. When I walk around a store and I see one of those kids, they’re just so happy to see me. It really brings a tear to your eye.”

“Following in the footsteps of an amazing athlete like Jack Roesch that got this award was something important to me,” said Svec, who will attend the University of Cincinnati, where he will throw the shot put and discus on the track and field team. “I’m happy I could live up to his standards and the standards of Avon. It’s exciting to bring this honor back to Avon.”

Svec was a four-time letterwinner and state qualifier in track and a three-time letterwinner in football. He earned All-Ohio honors in both sports and was the SWC Lineman of the Year in 2019 as the Eagles football team advanced to the Division II state semifinals for the third consecutive year.

To continue reading article from the Chronicle, please click HERE@avoneagles