Meet the 2-Year-Old Kansas Boy with Spina Bifida Who Has Stolen the Internet's Heart! 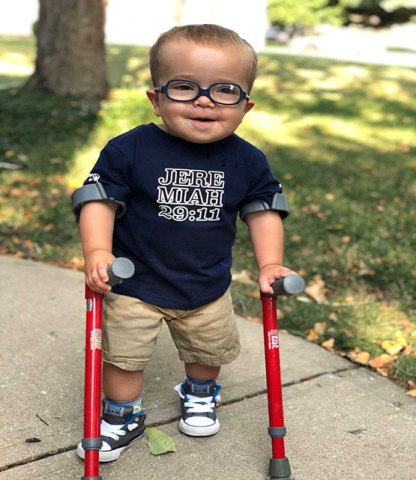 Two-year-old Roman Dinkel has reached typical toddler milestones, such as talking, playing with toys and interacting with other kids. But the little boy has drawn even more kudos for an extra special feat: walking with crutches.

Roman, who has Spina bifida, is shown in several Facebook videos showing off his toddler-sized forearm crutches. In one clip, the little boy is shown walking alongside the family’s dog, declaring, “Look, Maggie! I’m walking!” In another, Roman walked into a nearby room, pushing the door open with one crutch, sweetly yelling, “Hi, guys!”

“He doesn’t have a clue [that he’s famous],” Roman’s mom, 29-year-old Whitney Dinkel, says of her son. “I told him and he just doesn’t care. He’s very outgoing, he’s spunky, he’s got a great personality.”

Whitney and Adam Dinkel, 32, say they initially started the Facebook page, called Defying Odds: Roman’s Journey, about two years ago to keep their family and friends updated on Roman’s health journey. Soon, they began using the page to raise awareness about the illness. But, before the couple knew it, little Roman began garnering a lot more attention that they expected.

See him beat the odds

When the couple shared the sweet footage of Roman with Maggie earlier this month, the video quickly made its way around the Internet — it has amassed 24 million views.

“I don’t know why that one video took off like that! It just exploded. His Facebook page went from 908 followers to over 200,000 followers. It just got crazy,” Adam tells PEOPLE. Whitney adds: “It’s a little overwhelming having all these people basically join our private life. It’s kind of scary. But it was exciting because that means we can reach more people and have more people learn about Spina bifida.”

Roman was diagnosed with the condition in the womb when Whitney was just 20 weeks pregnant. At 25 weeks, doctors performed surgery on Roman in utero.

“To hear that everything wasn’t ‘normal,’ we were just devastated,” Whitney tells PEOPLE of the diagnosis. “We thought it was just the end of the world. We thought nothing but bad things, and that’s obviously not the way it is at all.”

The first year of Roman’s life were difficult for the couple, who also have two other children. And Whitney and Adam say they often “worried” about their baby’s progress.

“It was pretty scary. It was a lot of fear and worry,” Adam says, noting that Roman underwent a pair of brain surgeries, with the first when he was just 3 months old.

As Roman grew, he used walkers to get around. But recently, the little boy upgraded to the forearm crutches and his parents say he immediately fell in love with the new tools.

Late last month, Roman began to walk with the crutches on his own, and another sweet video shows the little boy walking to his mother.

“It was amazing to see. He had been working so hard to learn how to do it,” Whitney says. “So to finally see him, and see how proud he was, it just made me so excited and proud. I know him being able to use crutches opens up so many more opportunities for independence.”

Now, the Dinkels say they are enjoying every moment they have with Roman, but they don’t know what the future holds for their little boy.

“We pray and hope that he grows up and goes to college and gets married and has kids and has a fantastic, long life. But with Spina bifida you don’t know,” Adam tells PEOPLE.

“He could have any surgery at any given time, whether it’s another brain surgery or whatever. But ultimately we have faith that he’s gonna have an awesome life because of what we’ve done for him. That’s why we do everything we do, to give him the best life possible.”